American merchants were handicapped when special problems arose, such as delays in loading that forced them to spend the winter in Russia. They also faced the vagaries of the Russian climate, arbitrary Customs rulings on import duties, and unexpected competition. 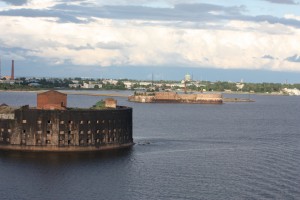 The first recorded American-Russian trade occurred in May, 1763 when Boston merchant Nicholas Boylston sailed into the harbor city of  Kronstadt. Carrying a cargo typical of the times – sugar, rum, and indigo – Boylston’s ship the Wolfe returned to Boston with  a cargo of hemp, iron, and linen.

Russian iron and linen were an important component of American-Russian trade. Russian iron was critical in the construction of the United States, given its use in the nails and other materials used to build the homes and the ships of New England and the Middle Atlantic. No less important was Russian linen, which was essential not only for sails and other commercial pursuits, but also for everyday use in American households—even at the highest level. Writing to her sister, Abagail Adams (wife of second president John Adams) is quoted as saying:

I also wish you to purchase me a piece of Russia sheeting and sit Nabby to make it….I also want you to get me a piece of the plain Russia toweling. The Sheeting and toweling take a receipt for as thus, ‘for the use of the Household of the President of the U.S.’

While no official records of the level of commerce exist,  it is estimated that approximately 400 trips were made from the colonies to Russia before 1800 – an impressive feat given the distance, time,  and cost involved, not to mention the difficulties in establishing diplomatic relations between the burgeoning American nation and the Russian Empire.