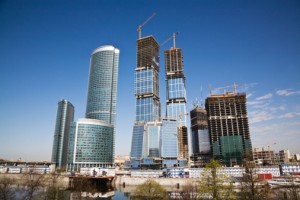 Contradiction surrounds many things in Russia. This is true for the Russian economy, which continues to be mired in recession due in large part to the continued fall of global oil prices. Despite these conditions, Mark Adomanis writes in Forbes  that the Russian capital is in the midst of a housing construction boom, breaking previous construction records set in 2007-2008. Adomanis states that a number of factors – including the development of the Russian mortgage industry  – can explain the record-setting year for the Russian housing sector.

Interestingly, the Economist reported that remittances from migrants working in Russia to their home countries in Central Asia and the Caucuses fell sharply in 2015. According to the Economist, the declining the value of the ruble and a lack of job opportunities are the main culprits.

Here’s where the contradiction enters. Migrant labor has traditionally fueled the Russian construction industry. With estimates of the total number of migrants living in Russia between three and 12 million, it is safe to assume that any Russian construction boom would remain reliant on migrant labor. Thus, the question remains: if there was an increase in construction, why did remittances drop (as much as 44%, according to the Economist) significantly in 2015?It’s possible that the amount of remittances didn’t change, just the amount of home currency a ruble buys. Similarly, it’s possible that a weakened ruble means that migrant workers have less to send back home. The Economist posits the possibility that increasingly stringent federal regulations have limited the number of migrants allowed to enter Russia. However unlikely (given visa-free travel between CIS countries and the large Diasporas already in-country), this could mean that there are just not as many migrants sending money home, or they have been pushed so far to the fringes that remittances are done outside of officially measurable channels.