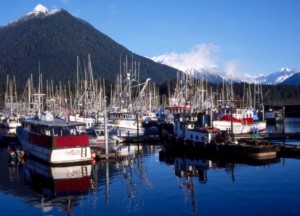 While firms such as Ropes and Co. were establishing themselves as players in the trans-Atlantic trade, the Russian American Company had been established as both a commercial and colonial force in the Pacific.

After several Russian explorations of the Alaskan coast b, private merchants in Russia pushed the government to grant an official charter for establishing regular trade. Of particular interest was the fur trade, of which sea otter was especially valued. In 1799, Tsar Paul I granted an official monopoly on fur trading to the newly-formed Russian American Company.

Along with fur trading, the Russian American Company built colonies along the coast. Two of the largest, Ft. Ross, (in present-day California) and New Archangel (later renamed Sitka, in present-day Alaska), played an integral role in the developing relations with the United States. While the former served as the southern most outpost for the Russian Empire (providing connections with Spain and the United States), the latter was the hub for Russian activity and the headquarters of the Russian American Company in North America.

Success, however, was short-lived. An increasing American presence, coupled with poor management and a declining fur market caused the Russian American Company’s profits to decrease to just over 700,000 rubles in 1849. Diversification, in the form of entrance into new markets in Hawaii and the sale of commercial goods in San Francisco, helped the company stay solvent; however, it never achieved the same measure of financial success as it had during the fur trade and the patience and backing of the Russian Empire waned. Eventually, both Ft. Ross and Alaska were sold to the United States, ending Russia’s colonial experiment in North America.